Sihanoukville is a province(khaet) of Cambodia on the Gulf of Thailand. The provincial capital, also called Sihanoukville, is a port city and growing urban center located 185 kilometres (115 mi) southwest of Phnom Penh, the national capital. The province is named after former kingNorodom Sihanouk and grew up around the construction of the Sihanoukville Port which began in June 1955 and became the only deep water port in Cambodia.Sihanoukville's beaches are a popular tourist destination. 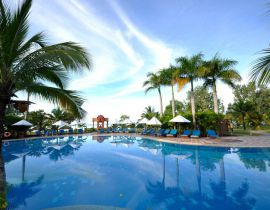 With a private beachfront and 2 outdoor pools, the tropical Sokha Beach Resort in Sihanoukville...